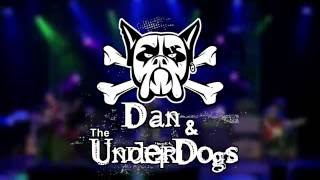 On the 13th of December 2014, "Dan & The Underdogs" performed their first live show at legendary music venue Circo Voador in Rio de Janeiro. As part of the line up for music festival Circo Rock they performed tracks from their debut album for the very first time alongside guest drummer Heitor Lima. Also including reworked classics like "Crazy" by Seal and Prince's hit song "Kiss", the show was recorded live in high definition by director Beto Braga and his team and is now ava